Too much to do.. so little time

So so much happened in the past couple months I don't even know where to start.  So I guess I'll start with cold chillin as I said in my last post.   Cold chillin was one of my favorite shows I had thrown at the farm before the farm was retired (ill explain that later)  it was supposed to be our kick off tour show but the rest our tour was cancelled.   However this show was a blast.  We had symbolik, enmity, alighieri, and az'rael play for the bands and Trever, David, and Jared spin for the djs.   It had an awesome winter theme and a surprising turnout.  300+ kids showed up.  We got Karlie to gogo for us as well.  She always puts together the cutest outfits!  Ill post some pics later.

All the bands sounded amazing and the crowd had a lot of energy!  It was alive in that garage.  The djs tore it up once again.  Trever brought his full setup with the 6 18" subs, 4 satellite speakers and all the multicolored strobe lights and lasers!   Awesome visuals.   I think we even had a disco ball.   Josh had his bar again and Ricky was running his vending machine with candy, chips, and single cigarettes (so illegal) -_-  lol but I had so much fun and people said it was our best az'rael set yet!  I watched the video of our set and must say we sounded pretty br00tal \m/

Now on to the monster that ate my dream.... New Years Eve Dance Dance Resolution

Posted by Brandon at 9:55 AM No comments: 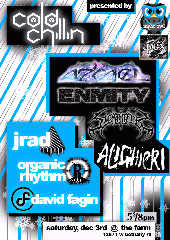 Posted by Brandon at 9:27 AM No comments: